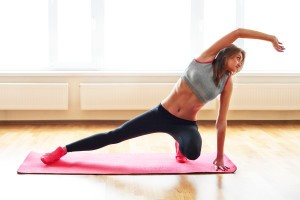 Since the release of a study by the American Council on Exercise (ACE) earlier this year which raised alarm over the high core temperatures of its Bikram (a.k.a. “hot) yoga participants, the safety of this popular form of yoga has been under closer scrutiny. Here’s what it’s all about, and if – or when – you should be concerned.

If you’re not familiar with hot yoga, it probably sounds a bit intimidating or hard-core. Essentially, it’s yoga intentionally practiced in hot, humid conditions. Although there are many forms, the most popular is Bikram-style, named after its originator, Bikram Choudhury. This type of hot yoga, which has been around since the 1970s, requires a temperature of 105 degrees, with 40% humidity, and consists of 26 exact moves performed sequentially in the 90-minute routine. Other forms of hot yoga vary in their peak temperatures and humidity level, and don’t necessarily follow a rigid sequence of moves.

The Benefits It Claims

Many devoted to hot yoga play up the benefits of warmer, more flexible muscles in these conditions, which allows deeper poses and develops better overall flexibility – a key goal in most yoga practices. Secondly, the heat supposedly mimics the natural climate of India, where yoga originated. Some believe this allows them to practice yoga as it was intended. Thirdly, elevated temperatures make the heart work harder, giving the participant a better cardiovascular (and presumably, better fat-burning) workout. Lastly, the profuse sweating associated with temperatures this high supposedly release harmful toxins from the skin.

In the ACE study of 20 seasoned Bikram yoga participants, the core temperatures of several of the men were measured at 103. Since heat-related illnesses become riskier after the body reaches a temperature of 104, this has the ACE concerned that the extremely high Bikram yoga temperatures (previous lower- temperature studies did not raise any concerns) pose a risk of light-headedness, dizziness, nausea, headaches, and other precursor symptoms of heat exhaustion — a life-threatening condition.  The ACE advices those who practice hot yoga to exercise caution, especially beginners who are not yet acclimated to the high temperatures, pregnant women, and those with diabetes or cardiovascular conditions. Beginners should start out at lower temperatures and then decide if they are ready to try Bikram-style. Another potential risk lies in one of its supposed benefits — the ease of stretching in high temperatures, which can encourage over-stretching and injuries.

Other yoga experts remind those contemplating hot yoga that you can get all the positive benefits — such as upper, lower, and core strength and flexibility — without the risks of practicing it in extremely hot conditions. If you do decide to give it a try,  here are a few tips for safety: